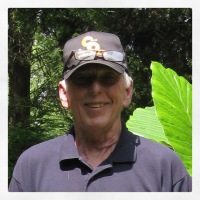 Tom is a native of Detroit, Michigan and has lived in Cleveland, Tennessee with his family since 1978. He first became interested in art as a child. Later, through the encouragement of his father, he took drafting courses in high school which led him into the graphic arts field.

In 1972, he produced his first painting under the guidance of NASA Technical Illustrators. He was taught realism in acrylics, a style he has mastered over 28 years. He is a self-taught artist who devotes all his painting themes to railroad depots and railroad still life. Past subject matter has included wildlife and ships. He is currently painting the L&N and Southern Railway depots between Knoxville and Chattanooga, Tennessee.

Tom says that one of the toughest things regarding his type of painting is the patience that is needed to fully research the subject matter. The whole idea is to depict a historically correct scene which sometimes can be difficult, especially if the subject is no longer in existence.