Featured subjects this month are of Nashville, Chattanooga & St. Louis Railway Yellow Jacket and Stripe locomotives in Nashville and Chattanooga:

Rock on Trains © 2019, Tom Rock + T.D.R. Productions.  All rights reserved.  Unauthorized use and/or duplication of this material without express and written permission from Tom Rock is strictly prohibited.

Featured NC&StL Railway depots for this December post include various locations in Alabama and Tennessee:

All photos courtesy of DepotMaps.com and Tom Rock.

Rock on Trains © 2018, Tom Rock + T.D.R. Productions. All rights reserved. Unauthorized use and/or duplication of this material without express and written permission from Tom Rock is strictly prohibited.

Featured depots on the blog this month are L&N, NC&StL, and Southern at various Alabama and Tennessee locations.

Rock on Trains © 2016, Tom Rock + T.D.R. Productions. All rights reserved. Unauthorized use and/or duplication of this material without express and written permission from Tom Rock is strictly prohibited.

The depot at Belton, SC, was constructed by the Southern Railway around 1910. Due to its location near the town square, it was an important focal point of the area. After the loss of passenger service in the 1960’s and a slowdown in freight shipping, the depot was abandoned by the Southern and acquired by the city. The depot was placed on the National Historic Register on August 13, 1979. Restoration efforts were completed in 1983. Following restoration a portion of the museum housed the Anderson County Library until 2004 when it was relocated. In 2006, the depot became the new home to the Ruth Drake Museum and South Carolina Tennis Hall of Fame Museum. 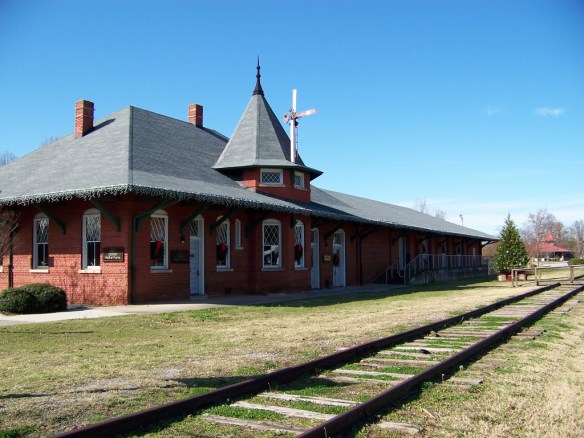 The depot at Conway, SC, was constructed by the Atlantic Coast Line Railroad in 1928. It is a long, rectangular, one-story, gable-roofed, frame board-an-batten building. It features wide overhanging eaves. The depot was placed on the National Register of Historic Places on May 18, 1995. The Atlantic Coast Line was eventually absorbed into the Carolina Southern Railroad which is a member of the Carolina Rails system. Excursion trains on the Waccamaw Coast Line occasionally run from Conway.

The depot at Heath Springs, SC, was constructed by the Southern Railway in 1903. Its primary use was in the transportation of cotton, cottonseed and cotton oil products from nearby farms and cotton oil mills, textiles and granite from a nearby quarry. The depot served Southern Railway freight and passengers from 1903-1940. It was listed on the National Register of Historic Places on January 4, 1990.

The depot at Albertville, AL, was constructed by the Nashville, Chattanooga & St. Louis Railway in 1892, one year after the town was incorporated. The building measures 112 ft x 40 ft and is divided into three rooms: two offices and one large warehouse. Passenger service ended in the 1940’s, although the depot remained in use for freight. The depot was listed on the National Register of Historic Places on February 20, 1975. The building was renovated for use as a seniors center in the mid-1990’s. A former L&N caboose next to the depot houses the Albertville Museum. 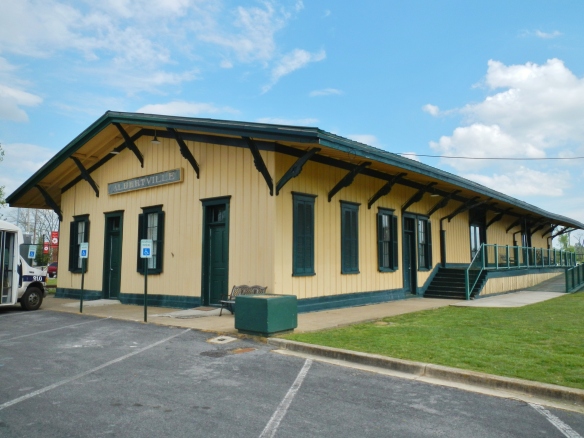 The depot at Andalusia, AL, was constructed by the Central of Georgia Railroad in 1899. It is the oldest and only wooden commercial building in downtown Andalusia. The depot now houses the Three Notch Museum, which includes the depot, several railroad cars, a country store, a log cabin, railroad memorabilia and period items. The restored depot is listed on the National Register of Historic Places.

Rock on Trains © 2015, Tom Rock + T.D.R. Productions. All rights reserved. Unauthorized use and/or duplication of this material without express and written permission from Tom Rock is strictly prohibited.

Featured Louisville & Nashville depots on the blog this month are those in Nashville, IL; Knoxville, TN; Wetumpka, AL; and Cartersville, GA.

The depot at Knoxville was built in 1905. It served as a passenger station until 1968 when the L&N ceased passenger service to Knoxville. The station continued to house L&N offices until 1975. It remained vacant until 1980 when Alex Harkness and his partners purchased it. In 1982 it was renovated for use during the Worlds Fair. In 1985 it was further renovated by Alex Harkness and Station 82 partners for use as office and special events.

The depot at Nashville, Illinois, was built in 1885 as part of the L&N’s expansion through Southern Illinois in the 1880’s. The building has a simple vernacular design common to L&N depots in small towns, which were intended to be functional rather than elaborate. The depot also served as an information center for Nashville. The depot remained in service as late as the 1950’s but closed sometime prior to 1984. It was added to the National Register of Historic Places March 1, 1985.

The depot in Wetumpka, Alabama, was built in 1906. The station served as a passenger and freight depot until service was terminated in the 1930’s and as a freight depot until 1973. In 1975 it was purchased by the First Methodist Church of Wetumpka and listed on the National Register of Historic Places.

Cartersville, Georgia’s former NC&StL depot looks a bit stubby because the freight room, which occupied some three-fourths of the buildings 200 foot length was demolished in 1972. The surviving passenger section dates to 1902. Parts of the walls on the freight side are older, dating back to the 1850’s and 1860’s. The original Western & Atlantic depot on this site was constructed in 1854. In 1890 the W&A was leased to the NC&StL which merged with the L&N in 1957. L&N was folded into CSX in 1980. CSX still operates the line under a lease from the State of Georgia, which has owned it through its entire history.

Rock on Trains © 2015, Tom Rock + T.D.R. Productions. All rights reserved. Unauthorized use and/or duplication of this material without express and written permission from Tom Rock is strictly prohibited.

DVDs and other memorabilia available for purchase at the Tennessee Valley Railroad Museum.

Visit Rock on Trains on YouTube by clicking here.

Rock on Trains
Blog at WordPress.com.