Today, I offer you a brief narrative of my own infatuation with trains. I hope you enjoy this blast from my past! 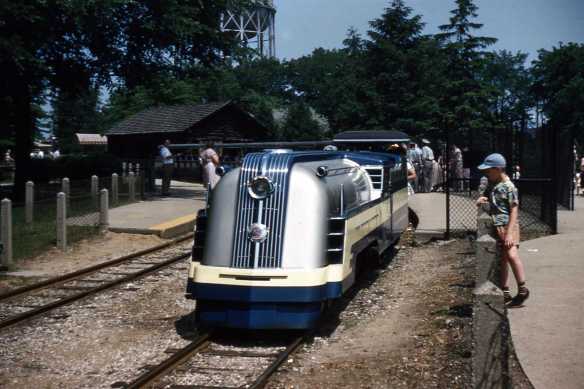 A very young Tom Rock and the Detroit Zoo train

My interest in trains began at a very early age, probably when I was 5 or 6 years old. My father would often take me to Sarnia, Ontario, to visit my great-grandfather, an engineer for Canadian National Railways. His job involved moving electric freight trains from Sarnia to Port Huron, Michigan. Canadian National rules would not allow me to stay on board the train during these movements, but grandfather made sure I boarded once the engine was parked near the roundhouse. At this time, Canadian National was still running steam, so it was quite an experience for a 6-yr. old to grasp the size of one of those coal-fired giants.

When I was 10 years old, my father accepted a job in California. On the way out west, we stayed in Cheyenne, Wyoming. My father noted my fascination with trains, so he took me to the Union Pacific station in Cheyenne for a closer look. There I saw a diesel locomotive up close for the very first time. When the engineer offered a tour of the cab, I backed away and refused to board. After a little encouragement from my father, I finally climbed the ladder and got into the cab. The engineer tried to show me the entire working components of the engine, but I wanted no part of it. I grew up around steam engines, but the sounds that this new type of locomotive produced frightened me. With that, I gracefully exited the engine.

Back in the 50’s, Chrysler produced locomotives to be used at the Detroit Zoo. These scaled-down versions of steam engines would carry patrons around the entire zoo complex. One day while I visited the zoo, my father took a photo of me studying one of the engines before it departed. I had convinced myself at this age that a railroad life was for me, but like all dreams, some come true and some do not.

Upon my high school graduation, I took a drafting job. This lasted 43 years until my retirement came in 2006. During those 43 years, I worked with many notable NASA illustrators that taught me the art of painting with acrylics.

I had to trade my railroading dream for painting, which flourished into railroad nostalgic scenes. Evidence of this dream can be seen on this blog or at my website, www.TDRProductions.us.

Rock on Trains © 2014, Tom Rock + T.D.R. Productions. All rights reserved. Unauthorized use and/or duplication of this material without express and written permission from Tom Rock is strictly prohibited.

DVDs and other memorabilia available for purchase at the Tennessee Valley Railroad Museum.

Visit Rock on Trains on YouTube by clicking here.
Join 72 other subscribers